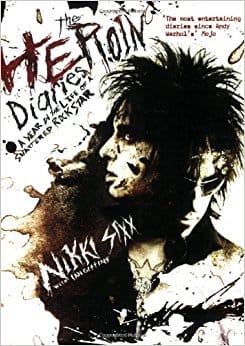 Another old post from 2008 I found while clearing out a few folders on a hard disk.

05|02|08: Nikki Sixx (with Ian Gittins) – The Heroin Diaries. Read this from start to finish in about 4 hours today. A sort-of follow up to the dirt, the Motley Crue autobiography. While it’s not quite as brilliant (or shocking) a read as the Dirt, and I get the feeling some of the diary entries maybe have a bit of artistic license and afterthought added into them, it is a really interesting and very readable book. Even though he describes himself acting like a complete d**k to many people (many times) throughout the book, you get the impression, from his diary entries and from the comments from his band members (and those he was a d**k to) that he’s a nice guy underneath it all. Maybe knowing a lot of the stories and tours he describes in the book (from having read about the crue in Kerrang when i was growing up) makes it more involving for me, but I reckon even a non-fan would find it addictive (no pun intended). Definitely worth a read, but I’d say it would be more enjoyable if you read it as a follow up to the Dirt, rather than as a stand-alone book.