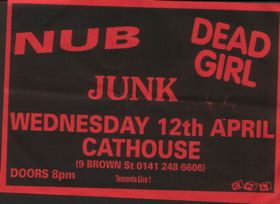 Back around 1994/1995, I played guitar (very badly) in a band. God knows how, but we managed to get a couple of gigs (3 to be exact). Two doing a battle of the bands type thing in Glasgow University, the other on a 3 band bill at the old Cathouse nightclub.

We were called Nub (little did we know at the time the dictionary definition of that was ‘small knob’) and we wanted to sound like Soundgarden/Prong/Sleep/Anthrax and Cathedral (with sound-like meaning we ripped them off wholesale..).

These are some flyers, tickets and posters I collected around that time when we were playing.