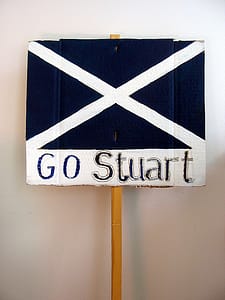 I entered the Göteborg Midnattsloppets race on the 23rd August 2008, a 10k race round Göteborg city centre on a Saturday night, starting at 10pm. Some really nice people from the University came down to cheer me on and made a sign! Very touched – really nice gesture (like the Saltire – nice touch too!).

The race itself was ok. Got a time of 57mins 33secs, which wasn’t brilliant – around the same as I’d got before. Was hoping for something around 55mins. Very big bottleneck at the start of the race (Packed in like sardines) though, which meant that after crossing start line it took over 2mins to actually get running properly so felt like I was playing catch-up for the rest of the race (that’s my excuse anyway).

Definitely think that I can do 55mins or less given another chance, so already looking out for another 10k…

Here’s the details of the race from the Midnattsloppet website: