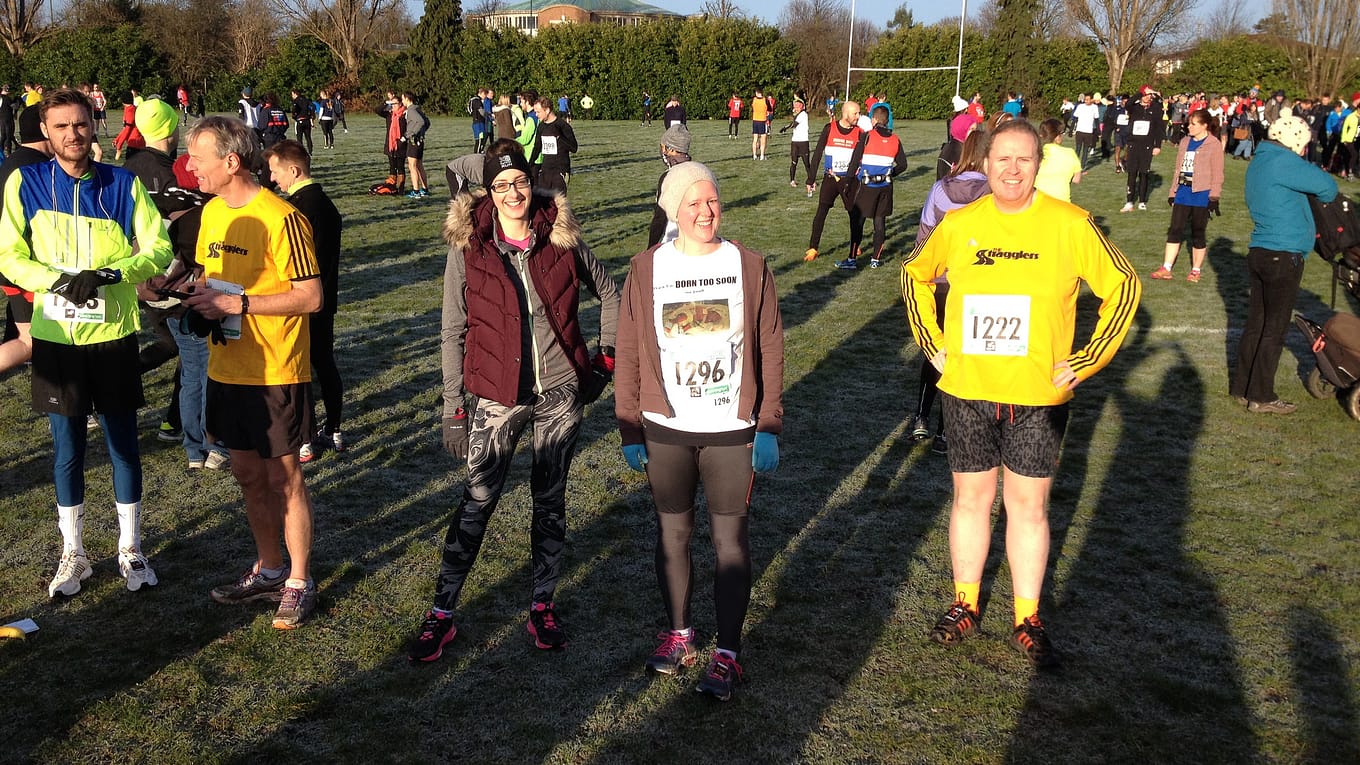 On Sunday I did my first ever 13.109375 mile race, or to put it another way I completed the Hampton Court Half Marathon!

I had initially entered the the River Thames Half Marathon that was being run in October 2014, but over the last year or so and in the lead-up to that race I really couldn’t motivate myself. I tried entering a few races during 2014 to see if I could build up to the half marathon, but I’d really started to hate running so by the time the October came round I didn’t bother even to show up and attempt it. I felt like I’d really got into a dead-end on what I could do, and I just wasn’t enjoying it any more.

Then I saw the email advertising the Stragglers half marathon training group. I have to say straight off I have never been a fan of running clubs or groups. Running isn’t something you do with others. I’ve always thought of it as a solitary thing that I do myself, a bit of “me” time. Headphones on, listening to Hank Williams, head down and get on with it.

It turns out I was completely wrong about that!

I thought I should at least give the Stragglers group a go and try one last way of getting motivated. I have to say joining them has been the best thing I could have done. I don’t think I’d have signed up and attempted the Hampton half marathon otherwise. The running group I trained with was just brilliant – they helped me improve fitness and stamina beyond what I would’ve thought possible, but I think more importantly made me enjoy running again – I looked forward to Thursdays and Sundays meeting a group of really great folk who made going out for a run something to enjoy, rather than something I grudged having to do to keep fit.

The half marathon course itself was a nice, flat run, going round a number of routes I’ve done before. In fact it goes right past my house! The bulk of the run was from Thames Ditton to Kingston and back via both sides of the Thames (see map below).

Our training group started off as a unit with Mark (one of our excellent coaching team alongside Kev) keeping our pace steady, and I kept with the group for most of the first half of the run then broke off around the 6/7 mile mark to see if I could push myself a bit and get a time under two hours. In the end, my finish time was just over the two hour mark. I thought I could have done it quicker, but the last mile through Ditton Common was like a mudbath, so really slowed me up (although the cheers and encouragement as I entered the final 2 miles from our other coach Kev definitely kept me going!).

All in all, the time isn’t really that important though. I am really happy to have done it and seen it through after a false start last year. The important thing is that I’ve got the bug again for going out running and with the help of the Stragglers group I enjoy my runs again rather than dreading them. I’m out of the rut and looking forward to doing a whole lot more (have a look here at what I’ve now planned for 2015). I’ve also realised that I was wrong about running all this time. It doesn’t need to be a solitary pursuit running with headphones on. Until now I’ve not realised the importance of camaraderie and the motivation you get from running with others, and even how good it is just having a chat about the run that night or how it went last week. Lesson learned, and headphones binned…maybe I’ll just hum along to Hank Williams quietly now during the group training!

And to top it all, I now have a PB for a half marathon to beat, I’m going to attempt the Edinburgh Marathon this year along with a whole number of other races and more importantly, I’ll be wearing my Stragglers shirt proudly now during all of them….