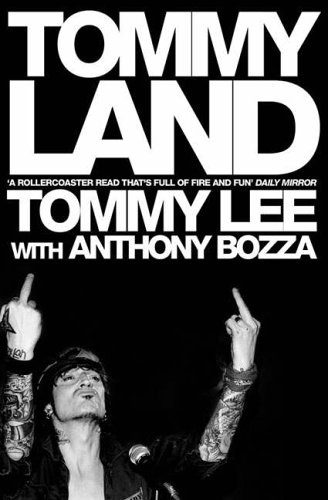 03|03|08: Tommy Lee (with Anthony Bozza) – Tommyland. Completing the trio of Motley Crue related books (alongside “The Dirt” and Nikki Sixx’s Heroin Diaries) is Tommy Lee’s book Tommyland. Tommy is probably the most well known of the 4 from the Crue, through his choice of women and his not-so-private home movies (with said choice of women). Also known as “T-Bone”, allegedly for his proportions in certain aspects. Not the most conventional of books, and maybe it seems a bit light compared to Sixx’s dark journal entries. Any book that starts with an opening chapter describing the author having a conversation with his c**k (and lets it have its own interspersed dialogue throughout), then follows it up with a chapter on his favourite sexual fetishes and tips is never going to be a weighty discourse on life and the meaning of the universe, but then what did I expect? Some nice novel approaches give the book a very jumpy “music-video” feel: The co-author adds footnotes when he thinks that the main text is too intelligible, rather than re-write it, plus as the book progresses there are some amusing inserts taken from the publishers comments to Tommy telling him to change parts of the book (for example not to have a chapter detailing your sexual preferences as the second chapter). I somehow got the feeling this was to keep the attention of the reader during the longer(ish) chapters, but I think it maybe reflects more Tommy as a person. Of course that could all just be reading way too much into what is essentially a pretty enjoyable lite-read biography about the drummer from Motley Crue.

I just realised I started this blog with a book by Albert Metzer, respected anarchist thinker, and now am onto Tommy Lee… I also started off watching the Battleship Potemkin last week and now I’m watching Family Guy. I see a trend emerging (and it isn’t upwards).